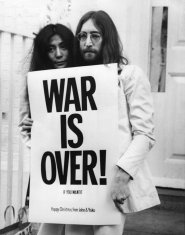 There is no “war on Christmas.”

Let’s just get that out of the way, right up front.

And while we’re on the subject, there should be nothing offensive about being on the giving or the receiving end of a heart-felt Happy Holidays. I mean, honestly.

We hardly have our Thanksgiving turkey digested each year before we start to hear rumblings (thanks for that, FOX News) of this terrible “war” that’s threatening to ruin Christmas for us all. Clearly, it’s all some calculated plot on the part of the godless liberals among us. Or at least that’s what a few of the talking heads on certain cable “news” programs — who just happen to be peddling books on the subject, it should be mentioned — might have you believe.

Now you can even access lists on the internet of the “naughty” stores who choose to say “Happy Holidays” and “Season’s Greetings” to their customers instead of “Merry Christmas.” (No, I’m not providing the link.) Boycott them and vote with your dollars, we’re told. Let’s force them to acknowledge the real “reason for the season,” right?

It would all seem completely silly if people weren’t so serious about it. And it is silly.

We used to hear protestations about the “commercialization” of Christmas. People — I think, often very accurately — bemoaned the way the holiday season had been relegated to obscene spending, tireless shopping, and the quest to find the perfect gift for everyone on your Christmas list. Now, it seems, the “war” has shifted to a haughty demand that retail centers (those same retail centers that are the very embodiment of the “commercialization” we were complaining about just yesteryear) adequately use the word “Christmas” in their advertisements and store displays when we do our (hardly Christ-honoring) Black Friday and Cyber Monday shopping. Consider the logic of it all for a moment. We’re willing to stand in line at 4 AM at the local Kohl’s on the night after we presumably gave thanks to the Lord above for all that we have, with our coupons in hand for everything we need need need to buy, just hoping to not get trampled in the midst of the rush for the 50% off flat screens. But the store had better honor the “true spirit of the season” by mentioning Christ in their signs and advertisements. Really, friends?

There is, of course, the semantic argument, as well. With so many of our fellow citizens fighting for their lives (and ours) in actual wars, it seems more than a little bit of bad taste to use that same word to describe the banner over Santa’s head at the local K-Mart. Some wisely eschew the word “war” in favor of rants about “political correctness,” but the sentiment is the same.

Mostly, I’m left to wonder about those who do feel threatened or hurt by more inclusive holiday greetings. What is it that’s being lost if someone gleefully wishes a warm Season’s Greetings when you’re paying for your milk and bread? What has been the damage, exactly? I can’t believe that anyone’s faith is really diminished as a result. And if it is? Well, that would say something about the aforementioned faith, wouldn’t it? If one were to feel slighted or somehow marginalized by a non-specific Happy Holidays, what does that say about our feelings and intent toward the millions of people who celebrate holidays of faiths other than our own, while rarely ever seeing banners, sales flyers, or Hallmark cards trumpeting the moments they hold dear. Marginalization is fine when it’s them, but just not us?

One of my dear friends is Jewish. Every year she is one of the very first people to go out of her way to not just wish me a Merry Christmas or a Happy Easter and the like, but she asks about my plans for the holidays, inquiring about how my family might celebrate or recognize those moments, always making sure to send her good wishes. I’m sure she does this to others, as well — she’s unfailingly thoughtful that way — but I’m always curious about how many of her non-Jewish friends take the time to ask her about her plans for the coming Hanukkah or Passover. How many have ever thought to wish her a blessed Rosh Hashanah? How many times have I forgotten?

I do believe in a true spirit of the season, but I don’t think it’s defined by rote greetings or store displays or songs sung at an elementary school. Instead, I prefer to think it’s about good will, caring for others, and recognizing the importance of love and grace in each of our lives.

So, with that, I wish you — each and every one of you — the warmest season’s greetings.

Happy holidays, one and all.